Peace Lutheran Church hosts many different artists throughout the year.  Our sanctuary has the versatility and the ambiance to enjoy the fullness of these exhibits while they are part of our spiritual family.  Exhibits have included TrAction Painting; Shokoor’s experience of Afghanistan; Kaleo and Elise Ching’s creative work; Bill Carmel’s Veil Tapestry; Thais Helena Guidolin Ouzounian, artist and poet; and Christine Hartmann’s work on Human Trafficking.  2017 has seen the works of the Love’s, Bright Stars Palestinian photography and our current exhibit “Emergence” with Mary LaCasse.
To visit some of these artists galleries external to Peace, please link to our Connecting with Artists page.

“Wheelism” – An Exhibit of trAction Painting Works by John A. Barry 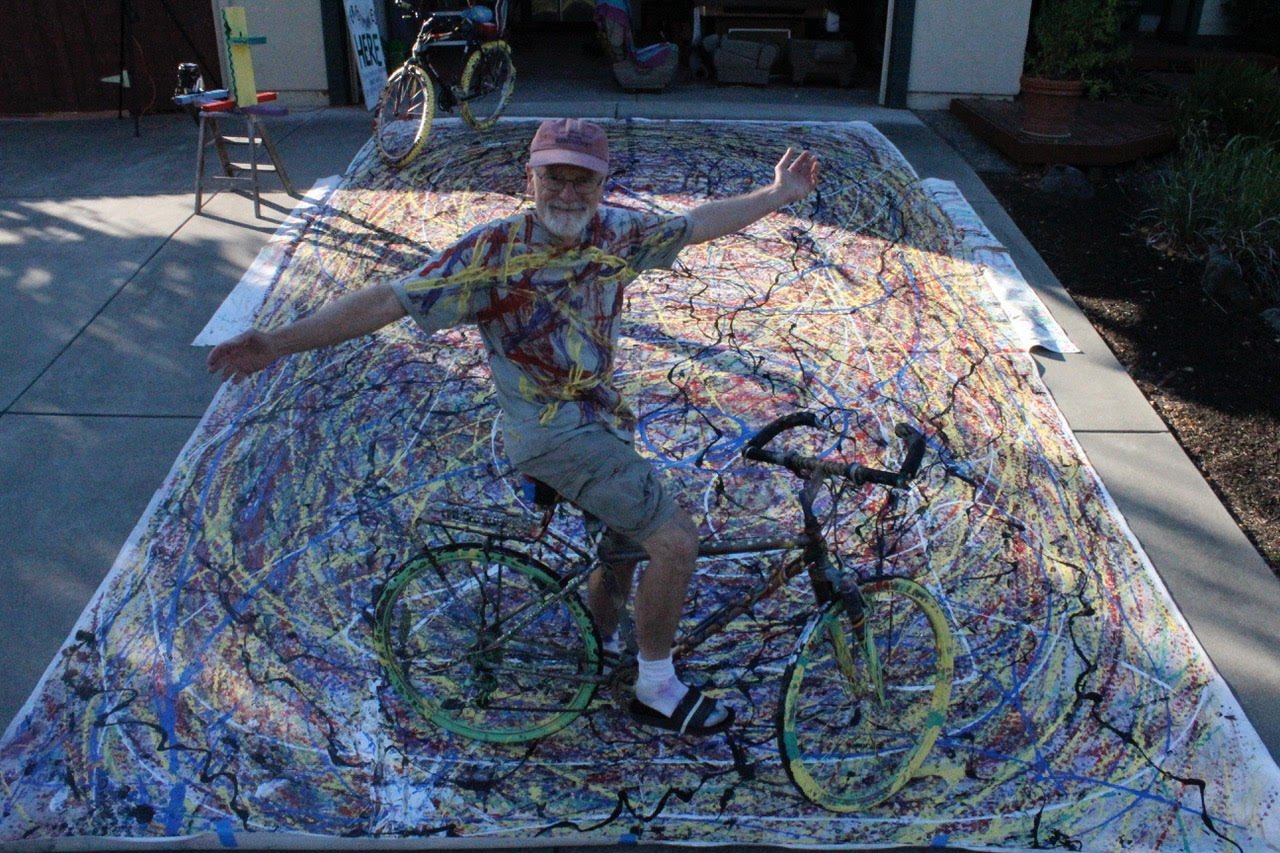 John A. Barry is an author and visual artist who can’t draw a straight line. Instead, he “draws” curved lines. His drawing tools are scooters, bikes, skates, wheelchairs, baby strollers, and other wheeled conveyances. Barry calls the genre he created trAction Painting. The term is a play on Action Painting (a.k.a. Abstract Expressionism), a late 1940s/early 1950s movement exemplified by drip painter Jackson Pollock. Barry also counts Christo and Chris Burden as artistic influences.
In this process/performance/kinetic genre, he paints large surfaces by applying acrylic paint with the aforementioned conveyances. Barry has developed mechanisms that deliver a continuous flow of paint to the vehicles’ wheels—although with skates, he often dips the wheels into basins of acrylic and then rolls. “Skainting” is the blended word he coined for painting with skates.
Prior to gaining trAction, Barry started making visual puns, primarily with repurposed and/or found objects. A few of his puns are included in this exhibit.
Before turning to turning wheels laden with paint, Barry labored for years in the publishing business, as a copy editor, managing editor, and editor-in-chief of numerous print and online magazines. He is the author of Technobabble (the seminal study of the noncontextual use of computer jargon) and coauthor of Sunburst: The Ascent of Sun Microsystems. He wrote the copy for What A Zoo!, A Geopolitical Guide to the Beltway Bestiary, with illustrations by his son, Sean, who can actually draw. He has just completed the production of the manuscript for a memoir, HARD: A Boomer’s Odyssey from Hardcore in the Heartland to the Heart of Hardwareland. Publication is slated for the first quarter of this year.
Along with Bill Carmel—who organized this exhibit—and other associates, Barry has taken trAction Painting to summer camps, schools, and a youth rehab facility, where kids have produced some impressive works of art, employing trAction tools of the trade.
Connect with John!  www.traction-painting.com   [email protected]