The visible galaxies we see strewn across space are nothing more than strings of luminous flotsam drifting on an invisible sea of dark matter. 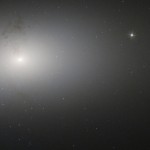 We acknowledge the NASA website for their extraordinary images. This image appears on the Peace Home Page.

Our own galaxy, the Milky Way, is a mid-size galaxy consistent of at least 200 billion stars, and stretching about 100,000 light years in diameter. The galaxies are often grouped into clusters—some having as many as two thousand galaxies.  We are one of billions of galaxies.  After 300,000 years of expansion and cooling, negatively charged electrons were moving slowly enough to get caught by positively charged protons.  Each capture created a new atom of hydrogen.  Once the process started, the universe rapidly made the transition from a mix of free photons and electrons to a vast gas of electronically neutral atomic hydrogen.  As the eons passed, a vast cosmos network of form emerged from these humble beginnings.  Galaxies appeared first.  Then clusters of galaxies were swept together by their mutual gravitational pull……Gravity alone constructed a cosmic architecture that is filamentary and beautiful.  But the universe is also composed of tremendous quantities of something that emits no light.  This is known as dark matter, and it constitutes the majority of mass in the universe.  The visible galaxies we see strewn across space are nothing more than strings of luminous flotsam drifting on an invisible sea of dark matter.
The continuous expansion of the universe is due to the predominance of a repulsive cosmic force that is associated with dark energy.  Scientists speculate that dark energy comprises about 73 percent of the total mass-energy of the universe and accelerates expansion of the universe.  Dark matter, on the other hand, prevents the universe from collapsing in on itself.  The recent discovery of the Higgs Boson particle (sometimes referred to as the “God particle“) may provide new insight on dark energy and dark matter.  We now know the universe is expanding indefinitely into the future.