Jazz at Peace is a direct descendant of the famous Jazz Vespers held at St. Peter’s Lutheran Church in Manhattan. Rising from its earthly origins, jazz took a turn for the divine over 45 years ago. That’s when the late Rev. John Gensel was approached by the great jazz drummer Max Roach who said,  “We are both doing spiritual work but my friends and I just can’t make that Sunday morning gig. What are you going to do about it?”
As a result, John started a Sunday Evening (Vespers) Service for “his flock” whose talents required them to play gigs into the late hours of Saturday nights. The 5:00 pm Vespers was designed as a service “by and for jazz musicians”…… with the public invited!
Rev. Gensel ministered to the jazz community for many years.  Over 300 Jazz greats contributed their talents to the Vespers and it now reads like a “who’s who” of the entire jazz world.  Gensel performed weddings for Herbie Mann, Bill Evans and Rashid Ali and funerals for Duke Ellington, John Coltrane, Coleman Hawkins, Billy Strayhorn, Thelonius Monk, Erroll Garner and more.  Duke Ellington composed “The Shepherd (Who Watches over of the Night Flock)” just for Gensel.   He was present when Duke Ellington died.

I came for the music…
I got the message

Shepherd of the Night Flock Documentary

The Shepherd of the Night Flock is a documentary about the jazz ministry. The need for a film began because the church was being relocated by a skyscraper construction project—its first edit, People on the Move, was used by churches across the country which were facing a similar problem—but the film began to evolve as needs became clear. One special use was to introduce different parts of the congregation to each other. There was a morning service run by old Germans who thought that the Jazz Vespers was just for people of color and others who did not really fit into what their idea of a congregation would be. Stoney says, “And so we started making stuff about the Jazz Vespers. And then combining 10 minutes of the morning service and 10 minutes of the Jazz Vespers. And we found that the morning people didn’t realize that the Jazz Vespers was actually a religious experience. And the Jazz Vespers people saw that the morning service people really cared about the traditions of the church. And it began to pull the congregation together.”
Over time the film developed into a nuanced biographical portrait of John Gensel. Link to the site for more about this documentary: www.der.org/films/shepherd-of-the-night-flock.html

As Peace Lutheran’s Jazz program grew, there was a strong interest in formalizing the partnership with St. Pete’s. Serendipity played its hand when Pr. Steve discovered that the senior pastor at St. Pete’s (Amandus Derr) was a seminary classmate. Together, Steve and Amandus officially sanctioned their love of jazz and spirituality as a dynamic and joyful ministry!
See External Resources for a link to the Jazz Church/St Pete’s to see what’s going on with its jazz musicians. 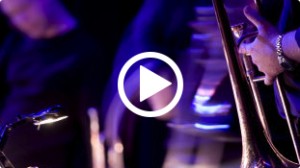