All of the icons presented here are by Robert Lentz who lives in New Mexico. For a catalog of his works contact:   Bridge Building Images in Burlington, VT, 802-864-8346. All summary comments are from Sr. Joan Chittister.
Return to Contemplative Prayer

Charles failed at most things in his lifetime. Yet his failure, emptiness and total openness made him a man of great spiritual intensity. He worked among the Muslims in Algeria.  He was a poor man who loved everything God had created.  He shows us the face of the hidden God—everywhere in everyone.

At the age of 72 she was called “the most dangerous woman in America”.  Old, female, grandmotherly, widowed, childless and financially destitute she is an icon of powerless people making powerful commitments.  A labor union organizer she understood her work like that of Moses liberating the slaves in Egypt.  She organized a “Children’s Strike” around the motto “We want time to Play”.  She is a model of perseverance and an antidote to ageism in a society that glorifies youth and impoverishes the most vulnerable.  Forthright and feisty she looked at the world through God’s eyes and announced what she saw:  exploitation, corruption and injustice.  Mother Jones is a sign that no age is too late to live for justice.  She died at 100. 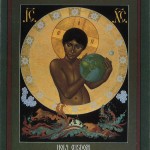 We know so many things and understand so little.
This is a prayer for the wisdom needed to guide and guard all living beings on our cherished planet.

An English Anchorite born in 1343.  She had a series of “Showings”/Revelations pertaining to her feminine experiences of God and Christ.  She left the world with 3 major insights:  That God is Mother (she not only uses feminine imagery to refer to God and Jesus, but explains it theologically); that fear of God is not humility; and that even though we sin all will be well.  She left for us a concept of the femininity of God, the accepting and affirming presence of God and total trust in God. 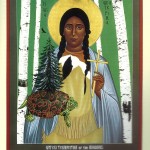 An Algonquin born in 1656 along the Mohawk River.  She was a sign of contradiction to two cultures and a prophetic presence in both.  She is an icon of Otherness.

Fiercely independent, these two lifetime friends brought 5 things that shocked and awakened a new consciousness:  a call to peace; a consciousness of the poor; a sign that it is possible to be happy without things; a radical reading of the Gospel that affirms all life and creation; and a new sense of the feminine.

At 8 years old he witnessed Columbus parade through the streets of Seville after his first voyage to the Indies.  Bartolome became a priest in the New World who witnessed the atrocities against the Indians:  Mothers in Cuba so overworked and famished they had no milk for their babies, some drowned their children in desperation and more than 7,000 children died in 3 months.  He spoke out against slavery, for the dignity of the Indians and —he was a failure most of his life.  He was a nobody who saw a truth, tried to tell it and would not quit.  He was a prophet who was persistent, obnoxious and a scourge to the soul of the powerful.