John Barry, Artist
trAction painting is a performance/process/
gestural genre the artist invented in 2011. These works transform wheeled conveyances such as bicycles (bainting), inline skates (skainting), and scooters into “brushes” that deposit layers of latex or acrylic onto large flat surfaces, usually canvas.  John’s work is displayed in the Peace sanctuary. 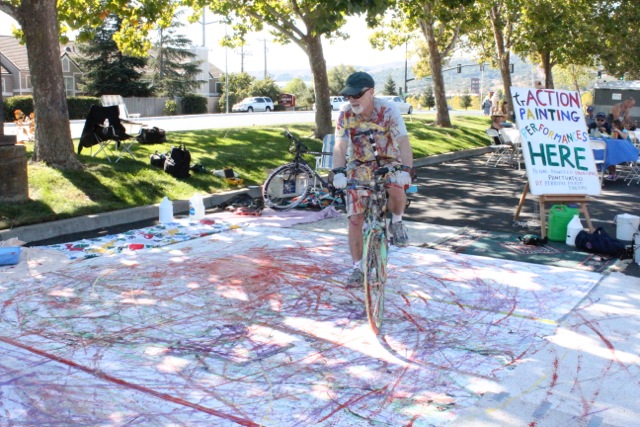 The name trAction painting is based on the definitions of traction as “the drawing of a vehicle by motive power; the adhesive friction of a body on a surface on which it moves.” It is also a take-off on “Action Painting,” a phrase coined by American critic Harold Rosenberg in 1952, in his essay The American Action Painters, to describe artists such as Jackson Pollock, Willem de Kooning, and Franz Kline and techniques associated with Abrstract Expressionism and The New York School. According to Rosenberg, the canvas is an “arena in which to act.”
To learn more, please visit John’s website, www.traction-painting.com or contact him at [email protected]