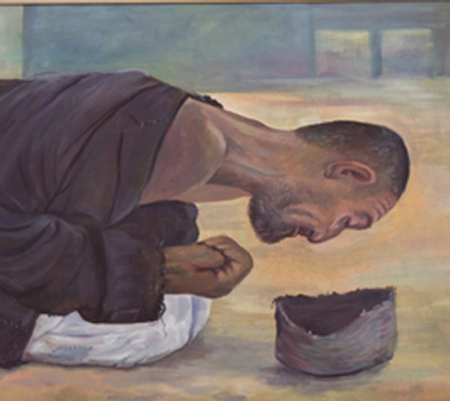 Through art we are able to bring people together, to understand each other better, to help one another, to live our lives in peace, and to treat one another with respect, justice and kindness.  —Shokoor

Bill Carmel, Artist: Reflecting on Shokoor
a member of Peace

It was a beautiful Fall evening in October 2012 when I walked down the staircase of a building on Main Street in Pleasanton and turned left. I saw a kiosk, normally filled with fresh picked flowers, filled with paintings instead.  Sprinkled among many paintings that looked like they belonged in a Ghirardelli Square tourist gallery (nothing wrong with that!), were some canvases that I liked very much.  A skilled hand (brush in the older ones and palate knife in the more recent ones) using desert colors in a bold and sophisticated impressionistic style was evident.  Lots of tribal and folk portraits of daily Afghan life, some of them rendered in a kind of naturalism that is direct, honest and compelling. His art is filled with compassion and a non-judgmental simplicity, which seemed such a contrast from Shokoor’s life experiences.
Over the next few months I got to know Shokoor and his brother Jelani, both refugees from the wars in Afghanistan. Jelani has been a resident for more than 15 years and succeeded in getting Shokoor here 2 years ago.  Their Muslim faith is strong within them and I enjoy discussing the sacred words and phrases contained in the calligraphy.
Shokoor’s art documents everything—moments of sublime beauty stolen from life in a country torn by war including the horrors that come from the collateral damage of a hundred years of terror. His body was crippled as a child.  Shokoor’s biography tells the story of his family – filled with the tragedies and sorrows that are all too common in that part of the world.  What is astonishing to me about Shokoor’s character is that he carries those insults and wounds without blame or malice.  The impossible thread that comes through the art, expressed with great skill and beauty, is joy. 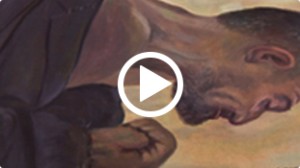 Shokoor’s art reflects Afghanistan history, different ethnic groups, and the portrayal of historic heroes in a realistic, impressionistic, abstract style using oil, watercolor, pencil, pen, chalk, pastels and palette knife. Shokoor’s art has been exhibited internationally from Afghanistan, Germany, France, and India to name a few with his most recent exhibits at the Group Art Exhibition at the United States Embassy in Kabul, and at Cal University Hayward, Dublin and Pleasanton Libraries. We are honored to have his artwork displayed at Peace Lutheran Church.
Shokoor has always been passionate about art, and his life experiences are expressed in his work.  As a young seven year old, a terrible fall left him with a broken hip which led to many failed surgeries and residual hearing loss from antibiotics and pain killers for his hip.  At the age of 18, Shokoor had to learn to cope with additional disabilities when he was diagnosed with Chronic Osteomyelitis and a kidney disorder. Through all of these set backs, his desire and passion for art prevailed and he graduated as a top student from the University of Kabul School of Arts in 1989.  Yet his greatest sufferings were just beginning with the unwanted war in Afghanistan, where people were taken from their homes in the middle of the night and never to be seen again. Disparity, grief and anxiety grew as curfews kept him handicapped in a different way.

Thanks to John Barry, Danville Express, for this photograph and John’s article Little Gallery, Big Heart. Learn more about Shokoor at artafghan.com